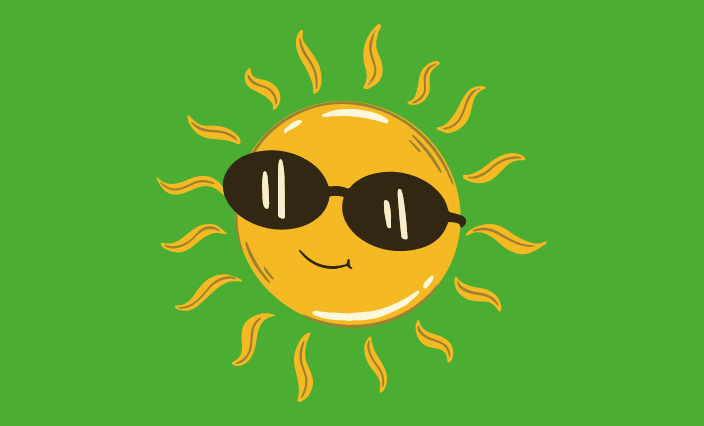 Summer is almost here...see below for more on the official beginning and ending of the season.  For many children it means school is out and they get to relax, go to summer camp, and spend more time with friends. Parents will figure out how to juggle daycare while still managing to plan for the family summer vacation. Overall summer is one of the most popular seasons as temperatures rise, and people get to spend more time outdoors and benefit from longer days and more sunlight. For now, we'll have some fun with trivia questions all around the summer season. Enjoy!

What day is the first day of Summer?

June 21, 2022 is the first day of summer, aka the Summer Solstice, and the last day is Thursday September 22.  See facts about the Winter Solstice here.

Can you really fry an egg on a hot sidewalk?

It’s possible but unlikely as the average hot sidewalk just isn’t hot enough to fry an egg. The surface temperature of the sidewalk would need to reach 158°.

What does the abbreviation SPF which is commonly referenced in sunscreen stand for?

What are the two holidays that tend to mark the beginning and ending of Summer?

Memorial Day and Labor Day are the holidays that serve as bookends for the Summer season, even though the official dates of Summer are different.

What band had a hit song Hot Fun in the Summertime, which was released in 1969?

What’s the hottest temperature ever recorded in the United States?

134° which was reached in Death Valley’s, Furnace Creek.

What’s the name of the 1987 movie starring Mark Harmon and Kirstie Alley was directed by Carl Reiner?

What is the name of the chemical put into swimming pools to help kill germs?

Chlorine. But swimmers beware as chlorine kills many germs within an hour, but some pesky germs can survive a few days.

Where does the phrase, Dog Days of Summer come from?

According the Farmers Almanac, it’s a reference that has to do with astronomy. Sirius, the Dog Star,  is the brightest star during the summer months.

What location receives the most lightning strikes in the world?

Lake Maracaibo in Venezuela averages 140-160 thunderstorms each year, and is a hotbed for lightning strikes.

The word ‘summer’ is derived from which Proto-Germanic word?

What vitamin can humans get from direct sun exposure?

Vitamin D, which is helpful for regulating calcium and phosphorus.

What year was the beach ball invented?

1938, and their origin has been traced back to California, which is no surprise.