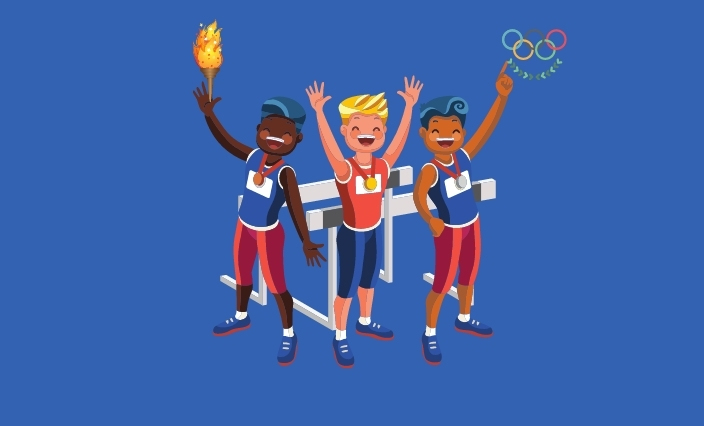 On your marks, get set, go! Oh wait, not exactly. The 2020 Summer Olympic Games were to be held in Tokyo Japan starting in July 2020. However, as the COVID-19 pandemic swept through the world, it became clear it could be very risky for athletes, coaches, event staff, and spectators to participate in the Olympic festivities.  Athletes who had timed their training schedule to be in peak condition in late July, were left wondering how the schedule would shift.  On March 24, 2020 it was announced the Summer Olympics would be postponed until July 2021.

What are the dates for the 2021 Summer Olympics?

The 2021 Summer Games will be held from Friday July 23 through Sunday August 8, 2021. While they will be held in the 2021 calendar year, they will still be known as the 2020 Olympic Games. This distinction is something that is sure to come up in rounds of sports trivia in the near future. Study up trivia nerds!

What are the five sports added to the 2020 Summer Olympic Games?

The Olympics Had Been Cancelled Before, But Not Postponed

While the International Olympic Committee (IOC) did everything they could, they eventually had to postpone the 2020 Summer Olympic Games in an effort to keep everyone as safe as possible.  This marked the first time the Olympics were postponed, although they had been cancelled three times due to world wars, in 1916 (WWI), 1940 and 1944 (WWII).

Who captured the gold medal in the first ever 1500 women's freestyle swim race?

Katie Ledecky touched the wall first after swimming her 30 laps in a time of 15 minutes and 37 seconds.

Which four male swimmers were on the relay team that captured the gold medal in the 4x100 freestyle?

Which is the smallest country or territory to win a gold medal in any Summer Olympic Games?

Bermuda, with a population of 63,000, carved out a place in history when Flora Duffy crossed the finish line first in the women's triathalon in the 2020 Summer Games.

Which country defeated the US in the 2020 semifinals of women's soccer, knocking them out of contention for a gold medal?

Canada defeated the US women's soccer team by a score of 1-0.

Which two men shared the gold medal in men's high jump in the 2020 Olympic Games?

Mutaz Essa Barshim of Qatar and Gianmarco Tamberi of Italy declined a jump off and mutally agreed to share the gold medal after they both jumped 2.37 meters and both failed on all three attempts of their next jump at 2.39 meters.

Which country took home the gold, silver, and bronze medals in the womens 100 meters at the 2020 Olympic Games?

Jamaica made it a clean sweep when Elaine Thompson-Herah, took gold, Shelly-Ann Fraser-Pryce took silver, and Sherika Jackson took bronze, bringing pride to the green and yellow of Jamaica.

What is the International Olympic Committee (IOC)?

The IOC which was created on June 23, 1894, is the governing body for the Olympic Games. It’s a non-profit organization with the mission to build a better world through sport.

Will Olympic athletes be required to get the Coronavirus vaccine?

No, while athletes will be encouraged to get the Coronavirus vaccination, officials are not making it mandatory.  Facemasks will be required when indoors with the exception of when eating and sleeping. Athletes will be subject to safety precautions including temperature checks and regular COVID-19 testing.  Over $900 million will be spent on measures to related to the pandemic.

Will there be fans in the stands for the 2021 Olympic Games in Tokyo?

Who are the top athletes to watch in the 2021 Summer Olympics?

How much is the broadcasting revenue expected to be for the 2021 Summer Games?

Based on the $2.8 billion in revenue brought in from the 2016 Games in Rio de Janeiro, the broadcast revenue from the 2021 Games in Tokyo is expected to eclipse the $3 billion dollar threshold. Because the pandemic will still be in effect and many people will still be practicing safer at home measures, a large television audience is expected. And large TV audiences boost profits for broadcasters. Kaching $$!

Have the Olympics ever been held in Japan?

If you've enjoyed reading up on facts about the 2020 Summer Olympics, a sports quiz might be something else you enjoy. We've got an array of online trivia games that can be played on Zoom or any other video conferencing platform. You'll find games with a variety of general knowledge questions, as well as games focused on sports and music. The games are perfect for playing with remote groups, and make great virtual happy hour activities.