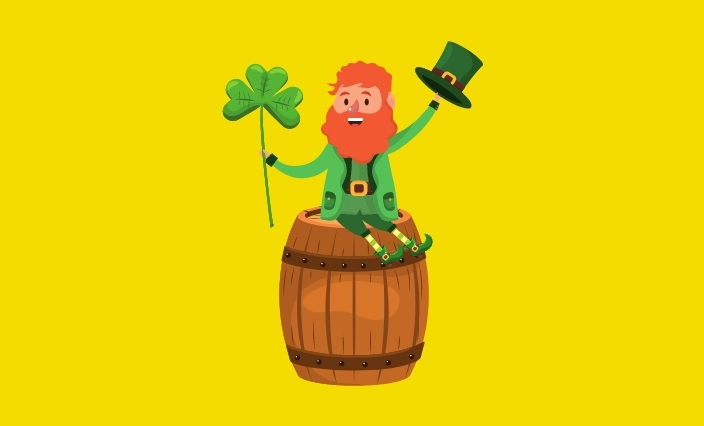 St Patrick’s Day is near. While many know it as the holiday where men and women imbibe in drinking green beer, pints of Guinness and shots of Irish Whiskey, there are some other traditions that make it a fun holiday. While the COVID-19 pandemic may slow some of the festivities for the 2021 celebration, we can still enjoy some fun holiday themed trivia.  Below we’ll take a journey into some St Patrick’s Day trivia questions and answers to see just how much you know about this annual holiday.

When is the St. Patrick’s Day holiday?

St. Patrick’s Day is on March 17th every year.  However, if the holiday falls on a weekday, the celebrations often take place the weekend prior. As a holiday that often includes heavy alcohol consumption, the weekends allow for bigger celebrations without a weekday hangover.  In Boston, a city with a large Irish population, the holiday is always celebrated the Sunday closest to the actual holiday.

Who is St. Patrick and why do we celebrate him?

He was a guiding saint in Ireland who lived in the 5th century. He is credited with bringing Christianity to Ireland. It’s been told that he used a three leaf clover as a metaphor to explain the Holy Trinity, (Father, Son, Holy Ghost), to the Irish people.

Nope! While many people think he was, he was actually born to parents in the Scotland and Wales areas.

Is the St. Patrick’s Day holiday a religious holiday?

It was initially, as a matter of fact, pubs in Ireland used to be closed to honor the holiday.  But that changed in the 1970’s, as the community tends to enjoy drinks and parades as part of the massive celebration.

In it’s homeland Ireland, it most certainly is. But other countries such as the United States haven’t given it that designation.

What US city has the largest St. Patrick’s Day parade?

New York City holds this honor. It’s often more than 6 hours long and draws over 2 million visitors who line the streets to see the floats, listen to music played on bagpipes and feel some Celtic pride.

What city dies the river green for St. Patty’s Day?

That would be the city of Chicago. Every year the Chicago Journeymen Plumbers Local Union use vegetable dye to turn the Chicago River a bright shade of emerald green. They are mindful of the environment and the dye lasts only about 5 hours.

What are traditional Irish meals eaten on St. Patrick’s Day?

Corned beef and cabbage is an Irish staple and quite popular on the holiday. Shepherd’s pie, a meat and potato dish, is also a favorite, and Irish soda bread works well as a nice carbohydrate to round out any St. Paddy’s Day feast.

Is corn actually in corned beef?

What exactly is a leprechaun?

Typically depicted as short bearded men wearing green outfits, they are characters invented in Irish folklore. They are shoemakers by trade and have placed a pot of gold at the end of rainbows.  Trivial fact, there are no female leprechauns, this may have to change in our day and age.

What does Erin go Bragh mean, and why do people say it?

It translates to Ireland forever, and is spoken as a phrase of Irish national pride. It’s referenced regularly at St. Patrick’s Day parades and Irish pubs around the world.

If you enjoyed these St. Patty’s Day trivia questions, please explore our winter solstice trivia, and trivia questions about Thanksgiving.  We hope you enjoy a safe and festive St. Patrick’s Day this year!