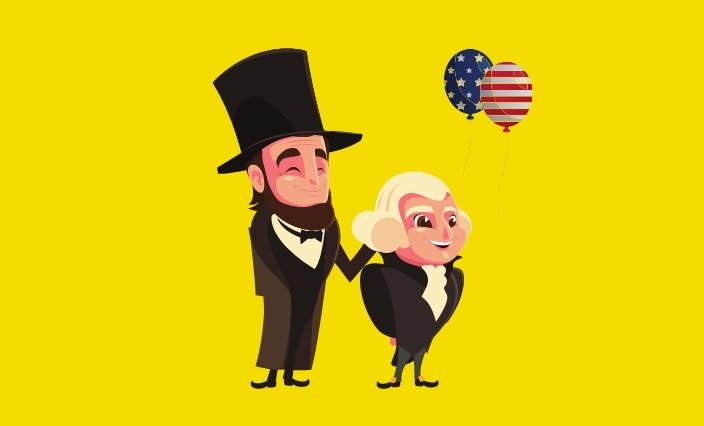 The inauguration of President-elect, Joe Biden is scheduled for Wednesday January 20, 2021 at Noon EST. This date and time is prescribed by the 20th amendment of the Constitution. The ceremony will take place at the Capitol Building in Washington DC.  With this event in the near future we’d thought it was a good time to dive into the topic, take a look at random facts about inaugurations, and some of the notable Presidential inaugurations of years past.

What is an inauguration?

By definition it is the formal admission of someone to office. When a President is inaugurated there are a few traditions that take place. They are sworn into office by the Supreme Court’s Chief Justice during which the President places his right hand on a Bible. This is a tradition that began with George Washington.  The Marine Band plays Hail to the Chief and the inaugural address is given.  In the evening there is a Presidential Ball which is a grand gala where women wear their finest gowns and gentlemen wear tuxedos.

Where do Presidential Inaugurations take place?

There have been 55 inaugurations held at the Capitol. But in the early years of the US government inaugurations were held in other locations including The White House, Federal Hall in New York City, and Congress Hall in Philadelphia, PA.

Who was the oldest president at inauguration?

Donald J. Trump was inaugurated and became the 45th President of the United States on January 20, 2017. He became the first person to ascend to the highest honor without any prior political or military experience. The attendance at his inauguration ceremony was roughly 400,000 people. Aerial photos showed the Trump inauguration crowd to be significantly smaller than the crowd in attendance for Obama’s first inauguration.

As the 44th President of the United States, Barack Obama was inaugurated to his first term on January 20, 2009 and the inauguration ceremony broke records with the attendance of over 1.8 million people. Aretha Franklin, the “Queen of Soul” was one of the many celebrities in attendance and she sang the “My Country, 'Tis of Thee”.  Obama was sworn in by Supreme Court Chief Justice John Roberts, who inadvertently strayed from what is prescribed in the US Constitution. Because of this slight mishap, Obama had to be sworn in again, the following day. It was monumental as Obama became the first African-American to serve as US President. His inauguration speech was 2405 words in length.

On January 20, 1993, Bill Clinton was inaugurated as the 42nd President of The United States.  Clinton was sworn in by Supreme Court Chief Justice William Rehnquist.  After taking the oath of office, he began his 14 minute inaugural address which focused on American renewal and the need to change. Maya Angelou read her poem “On the Pulse of Morning" after Clinton completed his inaugural address.

JFK became the 35th President on January 20, 1961. He broke barriers as the youngest person to take the oath of office, at the age of 43 and 236 days. He also was the first Catholic elected to serve as President. For the inauguration ceremony, he invited Robert Frost to provide a reading, which marked the beginning of the tradition of poets participating in the event. JFK’s inauguration speech was 1346 words in length and is best remembered by this line “My fellow Americans: ask not what your country can do for you—ask what you can do for your country.”

On March 4, 1861, Abraham Lincoln was inaugurated and became the 16th President of the United States. He was the first Republican President. The ceremony took place at the US Capitol and Lincoln arrived via a horse-drawn carriage. He’s the first US President with a beard, and it was an 11 year old Grace Bedell who encouraged him to grow the facial hair.

As the seventh President of the United States, Andrew Jackson, was inaugurated to his first term on March 4, 1829. The ceremony marked the first to take place at the East Portico of the US Capitol. Afterwards Jackson rode a horse to the White House for the inaugural ball and Jackson was the first President to invite citizens to attend the ball. He’s the founder of the Democratic party and became known as “The People’s President”.

Being the first President, George Washington’s inauguration ceremony took place at Federal Hall on April 30, 1789. Washington gave his inaugural address to Congress in the Senate chambers, it was 1419 words in length. His inauguration occurred 2 months after his term began.

If you enjoyed this post you may also enjoy these Presidential election trivia questions and answers.