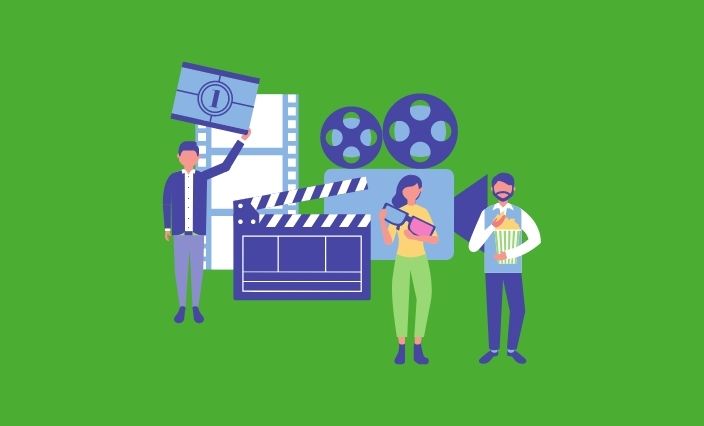 It takes a lot of planning and coordination to create a movie. What film fans see in the theaters is only the tip of the iceberg of the effort that went into the creation of the film.  From script writing to casting, to the acting and direction, there are a lot of moving parts involved in making a movie.  Here we’ll dive into some of the interesting movie facts that go on behind the scenes.

How Many People Work on a Movie Film Crew?

What’s the Salary for a Casting Director?

What are the Most Expensive Movies Made?

Five action movies within 2 franchises, Pirates of the Caribbean and Avengers, make the list of the top 5 movies with biggest budgets:

Napoleon Dynamite, had a filming budget of $400,000 yet earned over $46 million at the box office after it became a cult classic.   That’s an ROI that makes many movie producers drool.

How Much Do Movie Scripts Sell For?

The average movie script sells for $110,000. Often times the sreenwriter gets paid via installments based on milestones of when the first draft is delivered and final script is completed.

What Movie Has the Highest Gross Sales?

Avengers Endgame has the highest gross sales of $2,797,800, but Avatar is running a very close second with gross sales of $2.790,439.  Naturally the timing of these movies coming out, 2019 and 2009 respectively, factors in as ticket prices were much higher than 30 years prior.

What Movie Has Sold the Most Tickets Ever?

Looking at units of tickets sold helps put things on an even playing field and eliminates the factor of inflation over time. Gone With the Wind, which came out in 1939, has the honor of the movie selling the most tickets with 202,286,100 tickets sold.

Was the Film Industry Born in Hollywood?

Nope! While many of the big name studios are now currently in Hollywood, the birth of the movie industry actually started in New Jersey. Yes, hard to believe, but it’s true. Studios including Fox, Paramount, and Universal all began in the Garden State.

The movie poster for Jaws is often credited with being the most iconic movie poster ever. Artist, Roger Kastel, designed the poster for Steven Spielberg, and the scary visuals aligned with a movie that has what many found to be a terrifying plot.

When Did Popcorn Become a Snack Item Sold at Movie Theaters?

Starting in the 1930’s, popcorn became the go-to snack item sold in movie theaters. Theater owners introduced it to the lineup in an effort to make additional revenue during The Great Depression.

What Was the First Movie to Win a Best Picture Oscar?

The movie titled, Wings, was awarded the first Best Picture Academy Award in 1929. It is a silent film and is the only silent movie to ever win the award.

What Was the First Movie Ever Made With Sound?

The Jazz Singer is widely credited as being the first movie to utilize audio. It's interesting because it likely would have won the Best Picture Academy Award in 1929, but judges felt it had an unfair advantage because it did have sound, and was ruled ineligible to compete for the award.

Hopefully you’ve found these movie facts interesting and intriguing. If so, you may enjoy some of our movie trivia games like this quiz covering a variety of genres. If you like superhero movies, check out this trivia game.  Thanks for checking out our article of movie facts, if you found it interesting, please share on your favorite social media network.